Skip to content
HomeBe the person behind the badge

In 1989, the City of Tampa, with the assistance of federal grants designed to add 100,000 cops to the streets, rolled out a hiring campaign for new police recruits. The hiring campaign was “YOU are the person behind the badge!” Tampa’s goal was to hire one hundred new officers to combat the crime wave brought on by the crack epidemic racing through our nation. I was one of those 100 new police officers, ready and eager to take on the challenge of community service. I entered the police academy like most of my peers: Clueless about the realities of police work, but with a strong sense of pride and a desire to do the right thing. I’m proud to say that, for the most part, when I retired after nearly twenty-five years, I still tried to maintain that as my guiding principle. 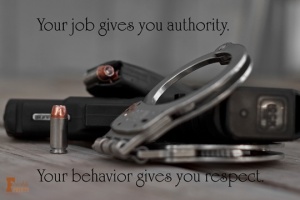 The tragic police shootings and the erosion of trust between law enforcement and minority communities from Ferguson to Baltimore, Chicago and St. Louis, have saddened me beyond measure. I’m frustrated that civil discourse is all but non-existent in too many places. Everyone has dug in on their own side of the divide, using worn-out clichés and useless rhetoric in order to defend what each truly believes in their hearts. Or at least what they’ve been conditioned to believe. What I don’t see nearly enough of is evidence that either side is remotely interested in actually listening to one another. Those old sayings “There’s a reason you have two ears and one mouth” or “you’ll learn far more by listening than talking” stand the test of time for a reason. Everyone has a story. Everyone has a truth. Everyone is a product of his/her environment and experiences, which color and forge their belief systems and biases. Yes, both sides have entrenched biases. We cannot even begin to listen with an open heart unless we have the courage to accept this truth.

As a police officer for a quarter of a century, I want to talk about the badge. I still love that slogan: YOU are the person behind the badge. I love it because too often we forget what that badge stands for. Integrity. Honor. Courage. Police officers chafe at the oft-repeated public rant: “I pay your salary!” Usually the statement is hurled at an officer by someone who takes exception to the way an officer is treating them—rightly or wrongly. I get that. But, the fact of the matter is, it’s true. Police officers are paid by citizens to protect and serve their community. This statement belies the complexities, dangers, and unlimited combinations of scenarios, which officers must adapt to each moment of their shifts in order to solve problems, and yes, sometimes survive. The job is hard, no doubt, but it’s what we signed on to do, for better or worse.

That’s exactly why the symbol of the badge is so very important. It requires more of an officer because no other profession is given so much authority and trust. A police officer is granted the power to take a citizen’s freedom or life at their own discretion. What other profession has that kind of power granted by society? That is an awesome level of power and trust.

What is required in return? The integrity and honesty of the badge. We cannot accept less. If someone tarnishes the badge, they must be purged. Mistakes can be corrected, but character flaws that expose true moral failure cannot be tolerated. Character matters above all else because we enforce society’s laws. This is what separates cops from other citizens. This is the non-negotiable bargain. I get frustrated when I hear officers complain that the Walmart manager caught stealing isn’t front page news, but a cop is.

The badge makes you different. Period.

In these difficult times, it’s important to remember what the integrity of the badge truly means. I have faith that law enforcement has the honor and strength to do the soul searching it takes to overcome any challenge. This means even the misguided critique and malice such as we see today. We all know nothing is black or white, or blue vs. black, but we also know we can do better challenging bad behavior. We know that most cops do not abuse the public trust. Those who do make us all less safe.

Negative perceptions of law enforcement can only be silenced by steadfast commitment to our code of ethics. Opportunistic pundits, false community activists, and even some so-called pro-police sites, throw gasoline on the fire rather than engage in thoughtful dialogue that might actually do some good. Please remember your calling. Don’t take the bait and fall into the negative tit for tat. Stay true to your principles. Your actions will speak louder than those who want to keep dividing.

The only way to overcome the current negativity is by listening to the voices in our communities, having the courage to address our shortcomings, and doing the job with integrity. Be true to your oath, be diligent crime fighters, and have the wisdom to educate your peers and citizens alike on the virtues of law enforcement. Ignore those in your ranks who have succumbed to an us versus them mindset. Do not let them darken the virtue of the policing. Be the example for your community and your profession. Be the person behind the badge.

Delving into the murky mind of author Jessie Chandler

Stuff That Needs To Be Said

To educate, inform and engage Eureka in solving problems of crime and disorder

Square Cop In A Round World

News and professional developments from the world of policing

The Life of a Police Family

The Art and Craft of Blogging

The latest news on WordPress.com and the WordPress community.