Last week, I wrote about the issue of law enforcement and mental health, specifically wondering why our profession isn’t the loudest voice in calling for commonsense gun safety legislation. The issue is part of a much larger mix of factors that combine to take a huge emotional toll on officers today.

From last week: “In the past few years everything has gotten worse. Everyone’s angry. Politics, social media, non-stop noise and hatred, putting us all on edge. We know as cops what that means. The cop on the street is the one on the front line of this crap when it boils over. Mental illness, domestic violence, murders, fights, opioids, homelessness, poverty, desperation. Oh, yeah, and assume everyone is armed in our gun culture existence. And our nature is to stuff it down. Unwind with a drink, close our social circles, tell ourselves it’s us versus them like never before. What could possibly go wrong?”

And then yesterday, Police One reports yet another NYPD officer commits suicide. California cops got into a gun battle with another shooter armed with an assault rifle. One killed, two wounded. Every single day we are surrounded by carnage. 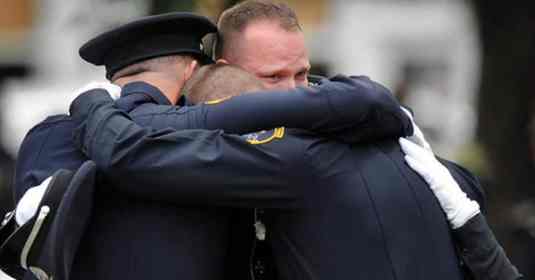 My friends, our mental health has always been under stress. Police work is inherently dangerous, thankless, stressful stuff. In our modern world, the darker side of our profession is now on full display. The bad apples are now exposed as never before. Social media and cell phones are blaring the ugliness daily. Guns are more prevalent, and available than ever, to the point that every training you get instills the fear “everyone is armed” and “everyone hates cops”, therefore everyone wants to kill you.

On top of that, mass shootings are on the rise. The .223 or AR-15 or AK-47 type rifles are all the rage now, flying off the shelves at a record pace, thanks to slick ads that equate ownership with “manhood” and “strength.” Our gun culture has reached a fever pitch. Our anger and partisanship has reached a fever pitch. Our race wars haven’t been this heated since the height of the civil rights riots. Police are underpaid, undertrained, under equipped, and still expected to perform at unrealistic levels of superhero (or antihero) status, just like on primetime TV.

Every problem polite society won’t deal with lands at the feet of the street cop. Rarely do we solve the problems to anyone’s satisfaction. What human can live up to that kind of expectation in the face of so many threats?

Then there is the very real presence of bad actors within police ranks. Racists, sexists, homophobes, white nationalists, and just plain old incompetent and lazy. Every good cop wonders daily why these people don’t get fired, and if they do, why don’t they get de-certified? Why do they too often get to move on to another agency to fuck everything up for those of us just trying to do a good job and stay alive?

The public has no clue. We don’t want to tell them because we don’t want to make things worse. But wouldn’t publicly shaming and purging the bad apples make policing look better in the eyes of the public? Wouldn’t law enforcement regain some credibility if we policed ourselves more effectively? What if we actually dealt with the many damaging online law enforcement sites that allow and encourage angry, hate-filled language spewed under the cover of free speech? The dangers we face don’t excuse misconduct or racist rants. Good cops know these sites only feed the malignancy.

Our conduct is scrutinized because the badge and public trust make us different. The shame when bad cops are exposed only reflects upon the rest of us to the extent that we allow or have allowed those stains to remain in our ranks. Officer morale suffers in-house. Officer safety takes a hit when those bad actors shame our profession. Angry people want to hurt cops. That is the real consequence.

We need leadership to face our own shortcomings head on, not cowardly excuses or weak-sauce reasons not to take action. Leaders who demand the highest levels of professional behavior. Leaders who insist on sound policies and tactics. Leaders who stand by their officers when they do the job properly, and terminate those who stain the badge. Leaders who ensure their officers get the training, equipment, and support they need, rather than stoke the flames of division with the ‘war on cops’ rhetoric.

It’s time we take a hard look at ourselves and decide who we want to be. Professional, moral, respected public servants that most of cops are, or the immoral, dangerous, unethical, hacks the bad apples make police seem? Will we continue to enable the worst among us out of some misguided loyalty? Because if we keep telling ourselves empathy and emotion make us weak, we’re superhuman crime-fighters, we’re immune from human feeling, refusing to name problems, provide cover for misconduct, unwilling to admit fault, and unable to reconcile these conflicts, we will not survive. Personally or professionally.

And that, my friends, is what can go wrong.

Join 2,132 other followers
The Heritage Phenomenon

Delving into the murky mind of author Jessie Chandler

Stuff That Needs To Be Said

To educate, inform and engage Eureka in solving problems of crime and disorder

Square Cop In A Round World

News and professional developments from the world of policing

The Life of a Police Family

The Art and Craft of Blogging

The latest news on WordPress.com and the WordPress community.